The purpose of my letter is not to be rude or insulting. And I’m certainly not writing it to question your sanity or intelligence, but I have to admit that I’m starting to wonder about you. OK, so I’ve been wondering about you for a very long time. But recent events have finally pushed me over the edge and I have to voice my opinion.

There is the day you said that Madiba died. The various speeches where you talk absolute nonsense, the fact that you were holding a book upside down while posing with school children, the time you held the binoculars the wrong way round trying to look at your troops, and don’t even get me started on the whole war thing.

It’s not that I have anything against the Americans. I mean seriously, my brother lives there now and my sister in law is a proper yank, but i love her and her family to bits. I have American family, American friends, and after my visit to the states 18 months ago I fell in love with the country. I just don’t particularly like you…mostly because i think you’re an idiot.

I’m sure you’re dying to know which act of stupidity finally led me to write this letter. Well, please take a look at exhibit A: 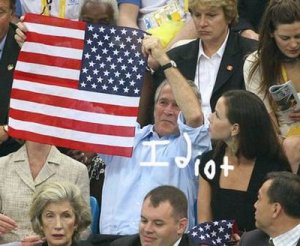 Now, in case you still haven’t noticed your problem, I’ll direct your attention to the flag.

I think it is absolutely disgusting that a president can sit at an important event like the Olympic games, proudly displaying his country’s flag the wrong way!!!!!

In my opinion you probably won’t even understand half the words used in this letter, and you might have to get someone to translate it for you. Or maybe your just a great big klutz and because you’re the president of a biiiiiiiiig country it’s more publicised. The trick is to think before you speak and act. Trust me……if you have half a brain, that plan will work wonders for you.

P.S. This is a disclaimer. The information displayed here is merely an opinion about recent events and not facts. So if you don’t like it, don’t read it!