I would appreciate it if you could cut me some slack right about now *pulls face*.

OK, so it’s not ALL bad.  In fact, there are one or two super awesome things that have happened of late too. So, let me start with the first and the biggest and the bestest thing.  I passed my MASTERS degree:) Can we get a whoop whoop?  I realise that to some it might seem that I’m making a really big deal out of this, and they might not understand.  But to me this is a big deal.  It’s been 2 years of blood, sweat and tears and about a million sacrifices.  Late nights, no sleep, high stress level and millions of hours of research later and here i stand…i finally made it:)  I was so relieved i felt like crying:)  So allow me to say…yay me! and do a little happy dance and come celebrate with me if you want.

Last week Friday…or rather, the Friday before that….i finally relented and paid a visit to the hospital with regards to the growth in my hand.  The fact that it had been swollen and incredibly painful for days and that the growth had become remarkably bigger was really stressing me out.  Once can’t help but wonder if the original diagnoses saying it was a bone cyst was wrong.  What if it wasn’t something as innocent as all that.  What if it’s a tumor?  So i spent a stressful day at the hospital being sent back and forth between the x-ray department, the specialist the ultrasound people and the doctor.

The specialist was furious.  The original diagnoses had been wrong.  It wasn’t a cyst at all.  It’s an abnormal growth on the bone, causing lots and lots of damage and which would in time render my right hand absolutely useless.  It had to be removed immediately.  I was booked in for an operation on Tuesday. Panic stations! The specialist assured me that the chances of it being malignant was incredibly small, but they will test it anyway, just to double check.

So on Tuesday morning I was taken to hospital by my awesome friend.  His strength and support and calmness helped more than he could know.  I was on the verge of tears…since the accident i really don’t deal well with hospitals.  Thankfully the operation went off without a hitch and i was cleared for discharge on Tuesday afternoon.  At least i could go and recuperate at home…score!

It’s been a painful and frustrating couple of days.  Having your dominant hand rendered useless and in a lot of pain while living alone is NOT for the feint hearted.  My hand was so swollen that moving it became impossible and my knuckles couldn’t be distinguished from the sausages that were my fingers.  Thankfully most of the swelling is now gone:) I was perfectly miserable and whiny for a couple of days…I’m sure the entire twitter can vouch for that.  But my hand is improving every day and I’ll be back to see the specialist in a week’s time.  I’ve included a couple of pics of the progress:) 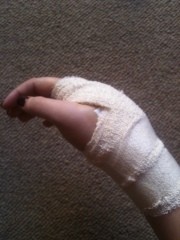 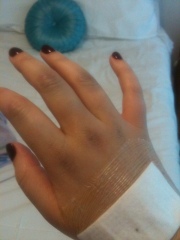 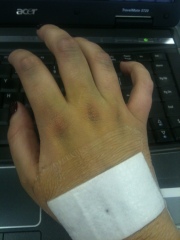 But now, the reason for my whiny letter to life, requesting a break is this.  I have the annoying habit of grinding my teeth and clenching my jaw in my sleep when I’m stressed.  Obviously the operation has been quite stressful for me, so I’ve been doing quite a bit of biting in my sleep.  On Saturday evening i woke up in excruciating pain in my lower right jaw.  Not only had I managed to rebreak a tooth i had broken years ago, but i also managed to lodge a piece of broken root in my jaw. *shudder*

By Sunday morning the whole right side of my face was swollen, nothing was helping for the intense pain and nowhere in JHB could i locate an emergency dentist.  Between my hand and my mouth i eventually collapsed in a pathetic little heap of tears and took myself off to casualties to get something for the pain.

Monday was my first day back at work…i won’t lie…it was painful.  But my hand is coming along nicely and this made me smile.  My mouth however was a completely different story.  The dentist is unable to help me until we can get the swelling down.  He did however take an X-ray and was horrified at the way that the root had broken off inside the gum and managed to lodge itself in the jaw.  He’s prescribed super strong painkillers and anti-biotics…i hope they start working ASAP…can’t really handle much more of this.  This also means that my as yet untainted mouth (no cavities, no fillings, nothing) will no contain remain untainted:/  I’ll be going in on Thursday (he’s kind enough to help me on the public holiday) to have an implant done.  Bye bye Christmas bonus…as my medical aid will not be covering this rather expensive procedure.

Now can you see where I’m coming from begging for a break?  What i have learned in the last two weeks is that when it rains it definitely always pours….this applies to both the good and the bad in life.  The trick is not to drown but to learn to dance in the rain.